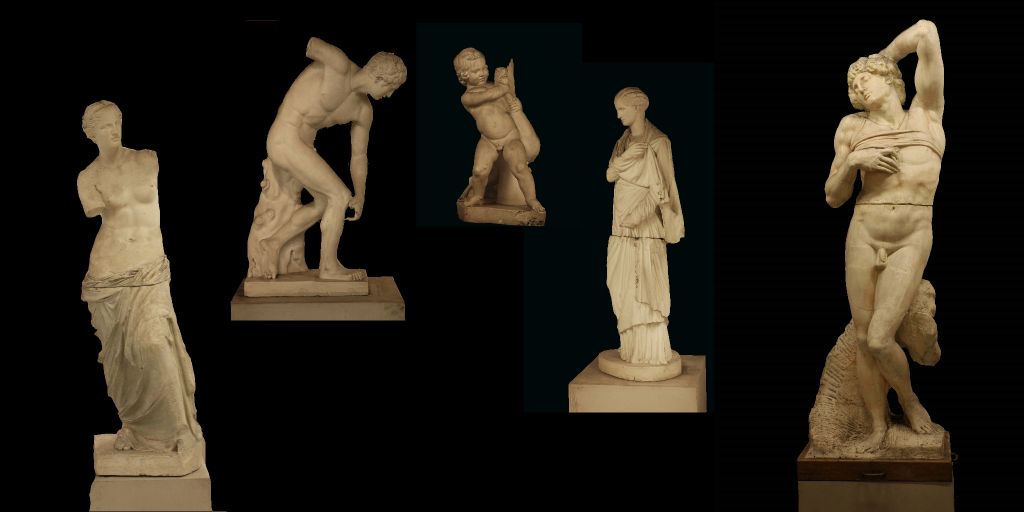 From 1744 onwards, Madrid’s Royal Academy of San Fernando had begun to acquire plaster casts of the classic sculptures and built up a great collection that was admired both in Spain and across Europe. The Royal Academy of San Fernando’s collection of plaster casts began with casts from the workshop of Giovanni Domenico Oliveri, court sculptor of Felipe V, Fernando VI and Carlos III; it continued with acquisitions made by Velázquez on his second trip to Italy: the Discus Thrower, Venus and the Shell, Boy with Thorn; then came the donations of 68 works by Carlos III after the excavations of Herculaneum (1776); the purchase of the Venus de Milo from the Royal Museum of Paris in 1852, etc.

After the creation of the Royal Academy of San Carlos in Valencia (1765), the acquisition of models in white plaster began; some were donated by Carlos III and the Royal Academy of San Fernando; others by individuals such as the Conde de Carlet, Archbishop Fabián, Engracia de las Casas, Pedro de Silva; and others who were commissioned by the San Carlos Academy to obtain new models of classical statuary.

This classical statuary was chosen as the ideal form to begin to learn how to draw. The absence of colour, its static and three-dimensional nature, and its formal perfection are all ideal aspects for the analysis of form and tone and for objective interpretation.

In short, this all goes to show the historical importance of the plaster sculptures at the Faculty of Fine Arts of Valencia. We can appreciate the efforts made by the Royal Academy of San Carlos in acquiring so many of them and support any steps taken to conserve and restore these cultural, artistic and historical assets.

Source of the text