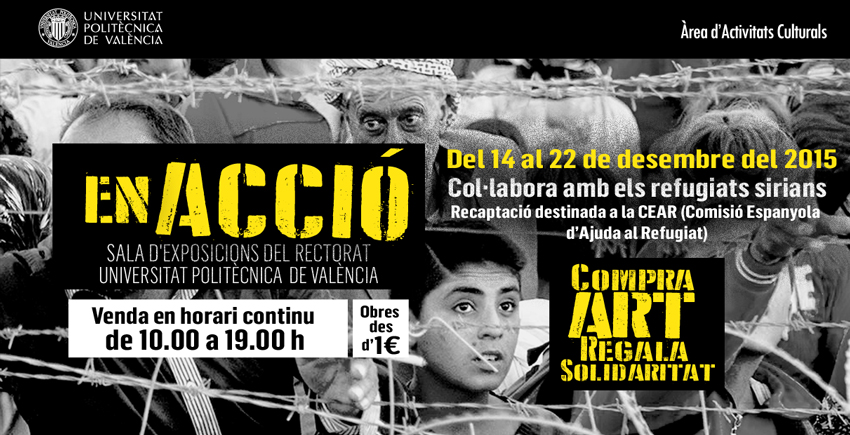 The Universitat Politècnica de València (UPV), through the Office of Cultural Activities, launched the In Action campaign on Monday, December 14, to send financial help to Syrian refugees, who are currently experiencing a dramatic situation.

Under the motto "Buy art, give solidarity", the UPV put on sale a total of 160 works (painting, sculpture, photography, etc.), which had been donated by more than 60 artists linked to the institution, at very affordable prices: from only 1 euro.

Thanks to the selfless collaboration of Fine Arts students and artists, the campaign managed to raise the amount of €3,735 to be donated to the Spanish Refugee Aid Commission (CEAR).

The Universitat Politècnica de València (UPV), through the Office of Cultural Activities, presents the exhibition "LuxData_25", open to the public until December 4 in the UPV exhibition hall, located on the ground floor of the Rectorate building on the Vera campus.

The exhibition, curated by Amparo Carbonell, commemorates the 25th anniversary of the creation of the UPV Laboratori de Llum, which was founded in 1990 from the transformation of the Laboratori de Llum i Color created by José Mª Yturralde in 1986 as the first research group of a Faculty of Fine Arts at a Spanish University. 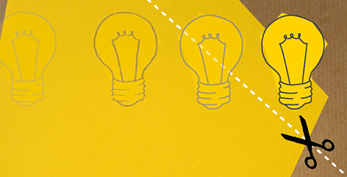 Every two years, the Universitat Politècnica de València organizes the Inventions Fair, with the aim of bringing the research carried out at the laboratories closer to the general public. The exhibition brings together about twenty products, prototypes and models developed in the UPV departments, institutes and centres.

Repensat i fet (Rethought and Done) is the title of a show which offers us the opportunity to get a closer look at the work of researchers and students at the UPV, in areas such as aeronautics, automotion, new mobile applications, chemistry, construction, health or agrifood technologies, among others.

In addition, as a new feature, the Invention Fair opens its doors to future researchers. In this exhibition, you can also see the two winning projects of the Petits Grans Invents 2015 competition, aimed at ESO, high-school and middle grade vocational students.

The Fira dels Invents is an event promoted by the UPV, with the collaboration of the Spanish Foundation for Science and Technology (FECYT) of the Ministry of Economy and Competitiveness. 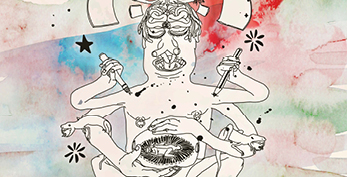 Poliniza, the prestigious urban art festival of the Universitat Politècnica de València (UPV), will celebrate its tenth edition next May and, to commemorate it, the university’s Office of Cultural Activities has organized a large exhibition, "10x10 Poliniza", whose inauguration will take place on Thursday, March 26 (8 p.m., UPV Rectorate Exhibition Hall, Vera Campus, admission free).

The exhibition, which can be visited until June 9, includes around 900 photographs taken by Kike Sempere during the nine preceding editions of the festival.

Curated by Juan Canales and Joan B. Peiró, this audio-visual exhibition reviews the history of Poliniza and also includes about 20 works belonging to the UPV Art and Heritage Collection created by artists who participated in some of the previous editions of the festival, such as Escif, Dinorah, La Robot de Madera, Charkipunk, Cere, Lolo, Dulk, Hyuro or Said Dokins.