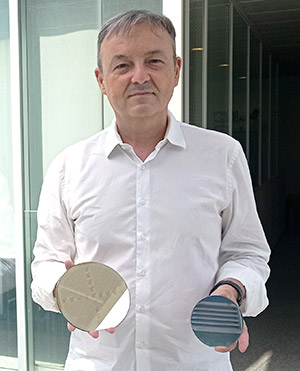 José Capmany, the director of the Photonics Research Labs-iTEAM and a professor at the School of Telecommunications Engineering (ETSIT) of the Universitat Politècnica de València (UPV), will add a new recognition to his research career.

Now it is the IEEE Photonics Society, the most important association in the field of photonics worldwide, which has conferred its Engineering Achievement Award on him. With it, the Society aims to recognise the "exceptional and pioneering contributions" of the UPV professor to the field of photonics. Capmany is also the first Spaniard to receive this award, which the IEEE Photonics Society has been bestowing for 30 years.

"I am very proud that the IEEE Photonics Society has awarded me this distinction, which recognises not only my work, but also that of my colleagues in the group, and especially that of my co-founding partners at iPronics. This is an especially significant award, as it highlights a combination of scientific excellence together with engineering and knowledge transfer based on those results," says Capmany.

A revolution in telecommunications

Photonics constitutes a true revolution in the field of telecommunications –it marks a before and after not just for the industrial sector, but for everyday life too. Its applications are manifold: it will facilitate, for example, 5G communications or autonomous cars. It will also get us a little closer to achieving quantum and neuromorphic computing (neuromorphic computing develops chips that mimic the network of neurons in our brains and their connections).

"All these applications require high flexibility and high-speed processing of large amounts of data. This is what both microwave photonics and programmable photonics offer us; the latter is the basis for obtaining chips capable of responding to the demands of these and many other applications. And this is what we are working on at the PRL-iTEAM of the Universitat Politècnica de València", adds José Capmany.

José Capmany Francoy, born in Madrid in 1962, is regarded as one of the leading experts in the field of optical communications both domestically and internationally. His multiple awards corroborate this: only last month he was bestowed the 2020 Spanish National Research Award in the area of Engineering. In 2012, he also received the Rei Jaume I Award for New Technologies; in 2015, the Chinese Academy of Sciences awarded him its Presidential Fellowship for Distinguished Scientists; and in 2017, he obtained the European Research Council’s ERC Advanced Grant in order to carry out the UMWP-Chip project, on which he is currently working.

Capmany, who has a PhD in Telecommunications Engineering from the Universidad Politécnica de Madrid and a PhD in Physical Sciences, has been Professor of Photonics at the Universitat Politècnica de València since 1996. From 2002 to 2016, he directed the UPV’s iTEAM Institute, where he is currently responsible for the Photonics Research Labs.

The UPV professor is a co-founding partner of the spin-off companies VLC Photonics, iPronics Programmable Photonics and Ephoox. He is also a Fellow Member of the Institute of Electrical and Electronic Engineers (IEEE) and of the Optical Society of America (OSA), and represents Spain on the Management Committee of the European Conference on Optical Communications (ECOC).