The UPV, the UCLM and Huawei are developing high-performance technology to guarantee the maximum performance of internet servers 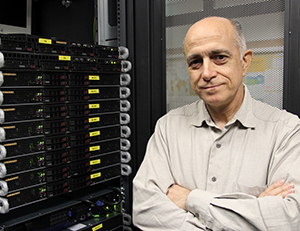 The Universitat Politècnica de València (UPV) and the Universidad de Castilla - La Mancha (UCLM) are working together with Huawei Technologies in developing high-performance technology to guarantee the maximum performance of internet servers. This is taking place at the first Joint Innovation Lab launched by the Chinese multinational in our country, which began its activity last July. So far, this collaboration has already resulted in the development of two variants of a new congestion control device for Ethernet, for which two joint patents have been filed and the process of their standardization in IEEE and IETF has almost been completed.

"Huawei has decided to invest in various centres around the world. In Spain it has chosen the Universitat Politècnica de València and the Universidad de Castilla - La Mancha for their international leadership in the field of interconnection networks for supercomputers and data centres," highlights José Duato, a professor at the UPV Department of Computing Engineering (DISCA), where he directs the GAP group. Duato is also a member of the Valencian Government’s Advisory Council on R&D, and a Numerary Member of the Spanish Royal Academy of Exact, Physical and Natural Sciences (RAC).

The creation of this research and innovation unit at the UPV and the UCLM was the result of four years of collaborative research. After a first project in 2014-2015, their collaboration was consolidated in July 2017, when two Huawei researchers visited the UPV and a joint meeting was organized, which was also attended by researchers from the UCLM.

“Huawei was developing a new congestion control device for RoCE, a very high-performance version of the popular Ethernet network. After finding in the bibliography joint publications of the UPV and the UCLM for the years 2005-2007 in which a new congestion control device –much more effective than the previously existing ones– was proposed, they decided to visit our research groups,” explains José Duato.

Since that first visit, three joint research projects have been developed, a joint research and innovation unit has been created, and the first joint project is now being completed, financed by the budgets allocated for said unit.

The agreement signed by the three organisations has initially been planned to last for four years, and may be extended for another four. For its financing, Huawei has initially allocated an amount of one and a half million euros, which will be increased in coming years. The projects will be chosen by a committee made up of two experts from the Chinese multinational and one expert from each of the participating universities.

”The architecture of internet servers, based on the classic architecture of personal computers, which has been stable for decades, is not suitable for the interconnection of nodes with a large number of computational accelerators. The number of nodes to be interconnected is also constantly growing in large data centres and supercomputers. The key element here is interconnection between components. Huawei has the economic and leadership ability to change the future of technology. And the UPV and UCLM research groups have the experience and knowledge to face such a big challenge”, says José Duato.

As Francisco Quiles (the director of the RAAP research group at the Universidad de Castilla - La Mancha) explains, practically all the applications that we run on computers, tablets and smartphones require an internet connection and, above all, access to data and calculation servers. “Without those servers, smartphones would become useless. They would not even be able to make phone calls,” says Quiles.

Along these lines, Pedro García, a professor at the UCLM, adds that the most demanding interactive applications (for example, internet searches, text translations, etc.) require a real-time response to requests that involve hundreds and even thousands of processing cores. "Properly organizing communications between the process elements without the networks becoming congested is essential for internet services to have response times of around one second," says García.

“Our contribution has been critical, both for developing much more effective congestion control devices and for Huawei's proposals to be accepted by standardization committees", highlights Jesús Escudero, senior professor at UCLM.

"Huawei aims to develop the most advanced technology in the field of HPC systems and data centres," said Mr. Hui Tao, director of Computing Product Line at Huawei Technologies, at the inauguration of the Online Huawei HPC Workshop 2020, where he also highlighted the importance of improving interconnection networks.