These holograms allow opening the blood brain barrier selectively, efficiently and in a highly focused manner, facilitating the administration of therapeutic drugs 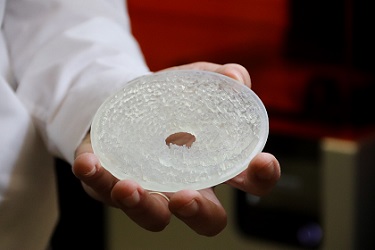 A team from the Universitat Politècnica de València (UPV), the Spanish National Research Council (CSIC) and Columbia University (US) has created 3D-printed acoustic holograms and evaluated their potential in animal models to improve the treatment of diseases like Alzheimer's and Parkinson's, among others. Their work has been on the cover of the journal IEEE Transactions on Biomedical Engineering.

The holograms designed by the team of researchers from UPV and CSIC allow the opening of the blood brain barrier selectively, efficiently and in a highly focused manner, facilitating the administration of therapeutic drugs to treat pathologies that affect the central nervous system.

As explained by Francisco Camarena, researcher at the Institute of Instrumentation for Molecular Imaging, a joint center between the UPV and CSIC, focused ultrasounds have great potential to treat neurological diseases thanks to their capacity to generate therapeutic effects in a precise and non-invasive manner. "However, applying them to the structures of the central nervous system is complicated, due to two obstacles: the effects of aberration and attenuation of the skull and the complex and extensive spatial distribution of the deep structures of the brain," Camarena pointed out.

The acoustic holograms designed by the UPV and CSIC researchers allow for a more controlled opening of the blood brain barrier than which is achieved by exclusively making use of ultrasound. Most importantly, they can correct the aberrations introduced by the skull. At the same time, they can generate an ultrasonic multi-focal beam in particularly important brain structures.

"Thanks to our holograms, the ultrasonic beam focuses and adapts bilaterally and very precisely on parts of the brain that are of great therapeutic interest, such as, for example, the two nuclei composed of the hippocampus, related to Alzheimer's disease, and which has a whimsical three-dimensional shape," added Noé Jiménez, Juan de la Cierva researcher at UPV.

It is the first time that the blood brain barrier has been opened simultaneously in the two hemispheres. In addition, the UPV-CSIC-Columbia University team has achieved this with a resolution that is far superior than the standard. This allows better locating the area to treat, minimizing the healthy brain tissue volume that is targeted by ultrasound while simultaneously reducing the cost and operating time.

How does it work?

The ultrasound transducer is like a speaker, but vibrates at a half-million oscillations per second. The hologram is placed in front of it, and it is crossed by the wave. At the same time, a cone full of water is placed in contact with the skull, through which the wave is propagated before reaching the patient’s brain. Next, the wave passes through the brain, finally focusing on the area of the brain that is of therapeutic interest. In addition, microbubbles are inserted in the bloodstream. When the bubbles reach the brain capillaries and they coincide with the ultrasound, they start to vibrate. The epithelial tissue of the blood brain barrier starts to give way and that is when "small cracks" open, through which the molecules of the drugs pass in order to treat the pathology that affects the central nervous system.

The hologram is printed, and customized for each case, with a 3D printer. "For example, let's say the doctor needs to do an ultrasound of the patient's amygdala. For that, they'd provide us with a CAT scan and an MRI of the patient’s head, on which they would identify and segment the treatment area. Based on this information, we design the hologram we need to get the ultrasound of the region of interest," explained Sergio Jiménez, doctor at UPV and currently on staff at the group from Columbia University, who also noted the low cost of the holograms, whose cost would range between 40 and 300 euros, depending on the medical application.

Currently, the team of researchers from UPV, CSIC and Columbia University are working on verifying this new technology for opening the blood brain barrier in non-human primates. The team is designing the first protocols for experimentation in humans to treat brain tumors and perform brain neurostimulation studies.