Castellón, Alicante and Valencia, among the most benefited 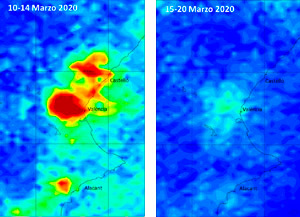 The concentration levels of nitrogen dioxide—one of the main elements responsible for air contamination— have declined 64% in the main Spanish cities after the implementation of the measures decreed to fight against COVID-19. They have fallen most in Barcelona, with an 83% decline. In Madrid, levels have dropped 73% and 64% in València.

These are some of the results of a study carried out by researchers from the Universitat Politècnica de València (UPV), belonging to the Centro de Tecnologías Físicas (Physical Technology Center). To carry out this study, the UPV team has analyzed satellite images of the Sentinel-5P mission of the Copernicus program of the European Space Agency (ESA), comparing data from March 10-14 against data from March 15-20. Based on this data, they have generated a series of maps that show the concentrations of nitrogen dioxide in some of the main Spanish cities.

According to Elena Sánchez-García, researcher at the Land and Atmosphere Remote Sensing (LARS-UPV) group of the UPV’s Centro de Tecnologías Físicas, nitrogen dioxide is an important indicator of air quality. “High concentrations of this gas can affect the respiratory system and aggravate certain medical conditions. In addition, this gas is related to the formation of acid rain,” she added.

Nitrogen oxides, like NO2, in the urban air originate from combustion reactions at high temperatures that are mainly produced from motorized vehicles. Oxygen and nitrogen are combined to make nitric oxide (NO), which later is partially oxidized, creating nitrogen dioxide.

“As has been verified in the case of Wuhan (China), and northern Italy, our study shows how the confinement measures and reduction of economic activity have translated into a clear decrease in air pollution throughout the country,” added Elena Sánchez-García.

In addition to València, Madrid and Barcelona, the study also took data from seven other cities. In the Autonomous Community of Valencia, nitrogen dioxide levels have dropped most in Castellón, with a 76% decline. Of the cities analyzed, it had the second largest reduction, only behind Barcelona. In Alicante, the decline was 68%. Though atmospheric variability (winds and precipitation) can affect the numbers calculated for each city, the effect of the current situation of confinement is predominant.