Will the beach be jellyfish-free? 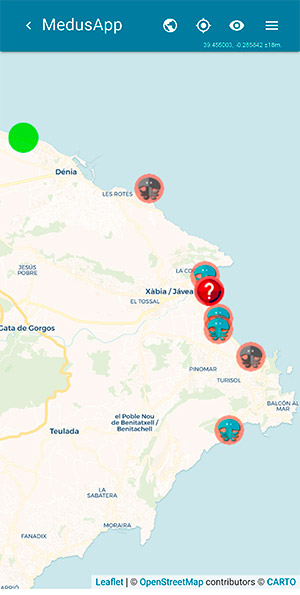 Will the beach be jellyfish-free? This is a repeated question summer after summer and the answer can be found in the new version of the MedusApp application. The app has been developed by a team from the Universitat Politècnica de València (UPV), the University of Alicante (UA), the CIBER of Respiratory Diseases (CIBERES) and the Immunoallergy Laboratory of the Fundación Jiménez Díaz Health Research Institute (IIS-FJD), and this year includes new functions. The most significant feature is that any user can report if a beach is free of jellyfish and, by doing so, that beach will be shown as a green point on the app’s map.

Since its launch in 2008, MedusApp allows any person to give an alert if they see jellyfish and provides in real time a map of the places where their presence is detected. The app was improved during the last year, when it was translated into English and added the possibility of uploading photos from the gallery. The new items in 2020 include new maps to improve how to interpret the sightings, as well as more details about beaches and coves.

Reporting the presence of toxic waste

In addition, in this new version, users can report the presence of toxic waste in the sea, such as plastic, oil stains, wood waste, soap and even masks and gloves. “Our aim is for beachgoers to contribute to depicting the conditions of beaches. The new version of MedusApp will help us to go into the sea more relaxed or with more caution, avoiding certain areas or even not swimming. And, more importantly, it allows any user to be a reporter,” explains Eduardo Blasco, one of the app’s developers.

From its launch until now, the app has reported over 2,100 jellyfish sightings, of which 1,500 have been published after being reviewed. Moreover, pictures of more than 500 stings have been published, which are directly sent to the Fundación Jiménez Díaz Health Research Institute in order to study possible allergic reactions to stings.

The scientific coordinator of the app, the professor César Bordehore, from the University of Alicante, remarks that the sightings made with this application are semi-quantitative. “If there are double the sightings in one area, it does not mean there are twice as many jellyfish, because the number of active informers also must be taken into consideration. The importance of this app is that real information is provided about both the presence and absence of jellyfish, which species are most irritating and which are least harmful, among other data. We understand that informing users of the beaches and the sea about this subject improves citizen response, prevents unnecessary risks and allows us to know more about our Mediterranean Sea,” remarks Bordehore.

How many jellyfish have been seen in recent days?

After logging in to MedusApp, the user is automatically alerted about jellyfish sightings in recent days and within

a 5km radius of their position. A quick global report about the situation maps can be generated. “We can also consult all the sightings in any range of dates or by species, from the beginning of the project,” adds Ramón Palacios, MedusApp developer.

Alerts of sightings and stings

The users of the app can send both the picture of the species they have seen as well as the quantity and estimated size. These data are published in a map that can be easily consulted on the website www.medusapp.net. They also can be accessed from the map section of the app. They can also send pictures of stings, explaining how long it has been since the sting, and add comments about the effects of the bite. “The app includes a sketch of the human body to help users indicate the area stung,” adds Ramón Palacios.

Of great interest for scientists and the fishing industry

The information provided by the collaborators about the sting suffered isn’t intended to take the place of a doctor, but to serve as a communication channel with a team of specialists in allergies and to be analyzed from a scientific and medical point of view. These data are managed from the CIBER of Respiratory Diseases (CIBERES) and the Immunoallergy Laboratory of the Fundación Jiménez Díaz Health Research Institute (IIS-FJD), led by the doctors Victoria del Pozo and Mar Fernández Nieto.

In addition, for sailors and fishers, MedusApp includes a new function to record jellyfish sighted in a transect (a navigation route) and the jellyfish in the nets of a trawl fishing boat. “This is of great interest to scientists, because with the collaboration of professional fishers and sailors, we can know which species are turning up in nets and which are seen far out at sea, in addition to the information provided by beachgoers. This strengthens the space and time quantification capacity of this project. It is important to note that deep water jellyfish compete with fish and crustaceans and can prey on their larvae, so the more jellyfish there are, the less fish. That is why it is important to monitor the appearance of jellyfish in trawl-fishing nets, because in some areas of the world they have seen an increasing presence of jellyfish and a decrease in fishing,” adds the marine ecology professor at the UA, César Bordehore.

MedusApp also includes an educational guide with pictures of the main jellyfish and an interactive first-aid guide updated with the latest medical knowledge. The guides include recommendations in case of a sting and depending on the species. This initiative is intended to be useful not only for beachgoers but also all lifeguards, who can have a comprehensive jellyfish guide on their smartphones. MedusApp comes from the European project LIFE Cubomed (www.cubomed.eu), coordinated by UA and the Institute of Marine Science of the Spanish National Research Council (CSIC).

MedusApp is available for both Android and iOS, and works online and offline, in the case there is no cell phone coverage or the user prefers to send the information via WiFi.