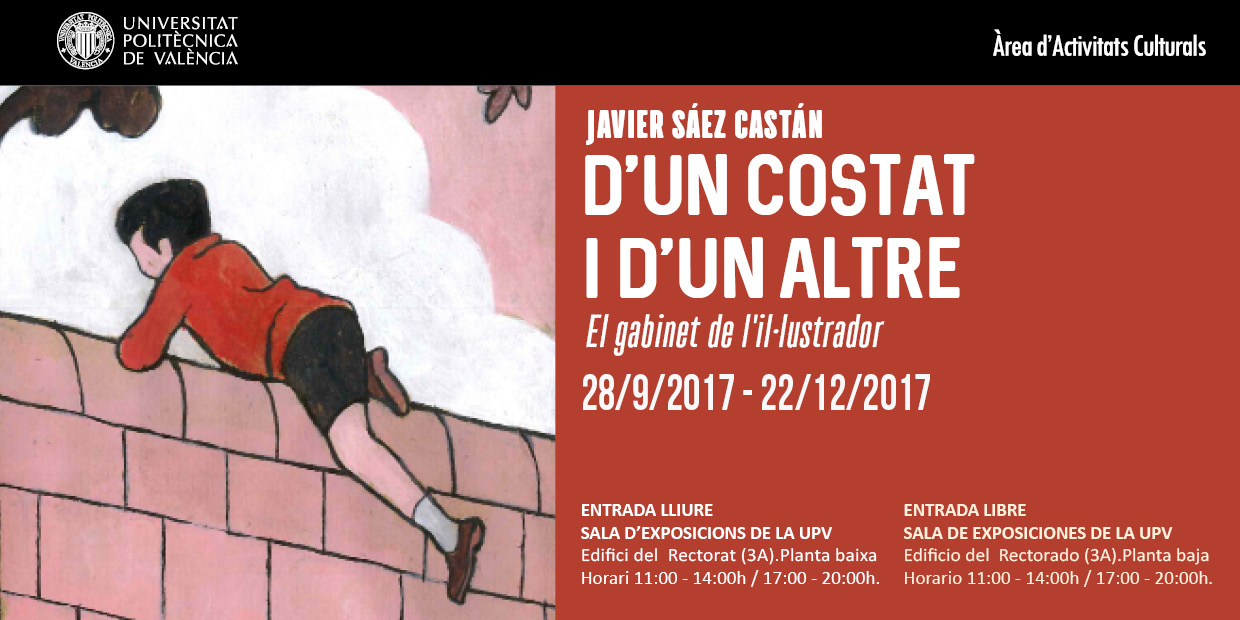 De un lado y de otro: El gabinete del ilustrador (From One Side and the Other: The Illustrator's Cabinet) presents for the first time an ample selection of works by Javier Sáez Castán, awarded the 2016 National Illustration Award and author of the renowned Animalario universal del Profesor Revillod, among others books and works.

This display is an opportunity to review different moments of his artistic career in more than hundred works (sketches, work in process, and finished works and books), including three unreleased series of drawings and paintings on paper created in 1986 and 1987, which highlights a turning point between the end of his studies and the beginning of his professional career, taking him to Alacant, Madrid and València, thus allowing us to see how the singular imaginary of this author evolves in those years of uncertainty, of La Movida movement, somehow in between daily life and the narrative of magic fiction.

Moreover, in the middle of the room, part of a new book —a work in progress from which the exhibition’s title comes— will be presented to the public for the first time so that the viewer can be transported into the illustrator’s desk and imagine him working, moving from the idea to the sketches, the first drafts, the references and the archive material, but without the story being unveiled yet.

Javier Sáez Castán (Huesca, 1964) is an author and illustrator of albums, comics, novels and other "illustrated artefacts". Internationally renowned, his work has been translated into several languages. He shares his experience as an author in courses, workshops and conferences throughout Spain, Europe and Latin America. He studied the speciality of Drawing at the UPV Fine Arts Faculty in the first half of the 80s, where he returns from time to time as a professor of the Master's Degree in Illustration and Design. Amongst his books, the following are worth highlighting: Animalario universal del profesor Revillod: fabuloso almanaque de la fauna mundial, with comments by Miguel Murugarren (2003); La merienda del señor verde (2007); Pom… Pom… Pompibol, (2007); Soñario o diccionario de sueños del Dr. Maravillas (2008); Limoncito: un cuento de Navidad (Océano, 2010); Nada pura 100% (2011); Extraños (2014); El armario chino (2016), or El animalario vertical, with Miguel Murugarren (2016). 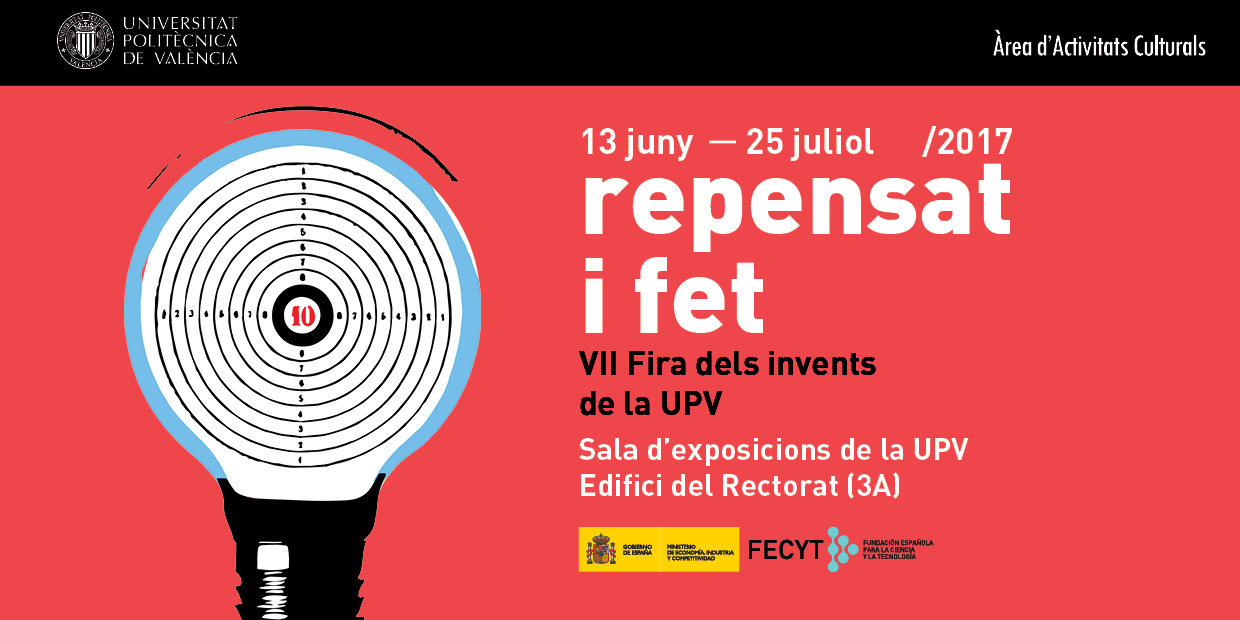 Every two years, the Universitat Politècnica de València organizes the Inventions Fair, with the aim of bringing research conducted in the laboratories closer to the general public. The exhibition brings together about twenty products, prototypes and models developed in departments, institutes and centres of the university.

Repensat i fet (Rethought and Done) is the title of a show that offers us the opportunity to get a closer look at the work of researchers and students at the UPV in areas such as aeronautics, automotion, new mobile applications, chemistry, construction, and health or agrifood technologies, among others. In addition, it opens the door to future researchers, as the two winning projects of the Petits Grans Invents 2017 contest are also on display, where ESO, high-school and vocational students participate.

The Inventions Fair is an event promoted by the Universitat Politècnica de València, with the collaboration of the Fundació Espanyola per a la Ciència i la Tecnologia (FECYT), Ministry of Economy, Industry and Competitiveness. 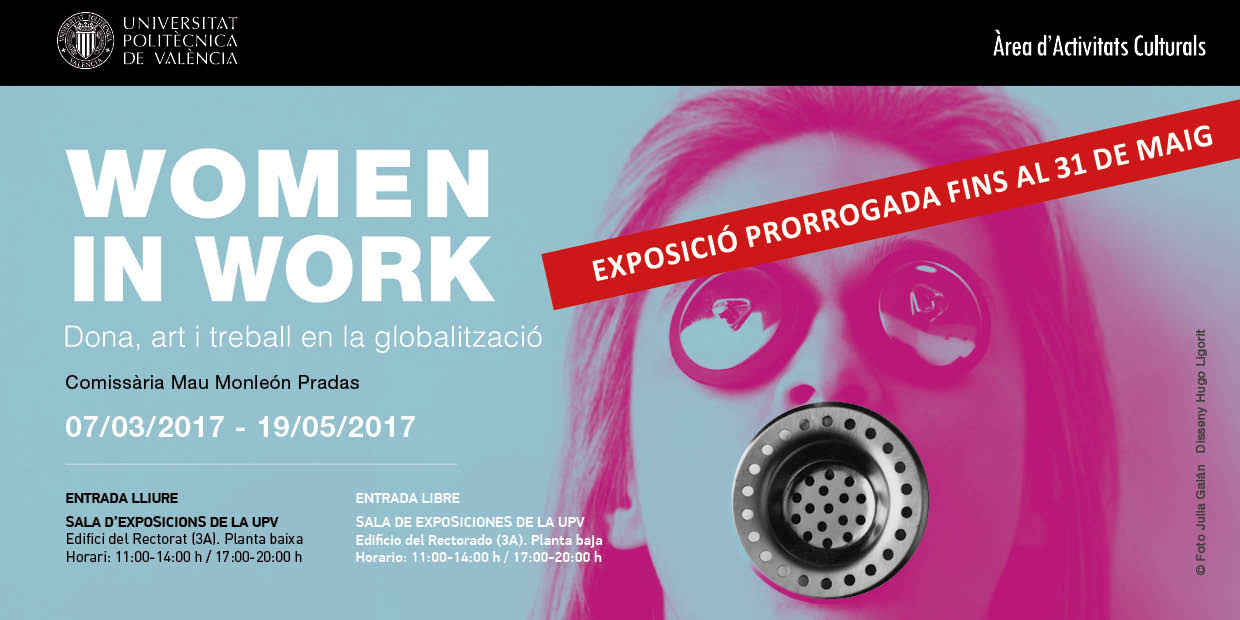 Globalization has not been able to overcome the old order of the socio-economic spheres, which was defined by the sexual division of productive and reproductive labour. Quite the contrary, while women have massively entered the productive labour market, they have continued to perform the invisible reproductive tasks (the task of caring that allows for the reproduction of life).

Women enter the labour market asymmetrically with respect to men, mainly due to their "reproductive tax". Another problem is the increase in free labour and the segregation of the global labour market, as well as the feminization of poverty.

“Women in Work. Women, Art and Work in Globalization” offers a review of some of the art forms that have covered this subject since the 1990s in Spain and at an international level.

The exhibition consists of five sections: 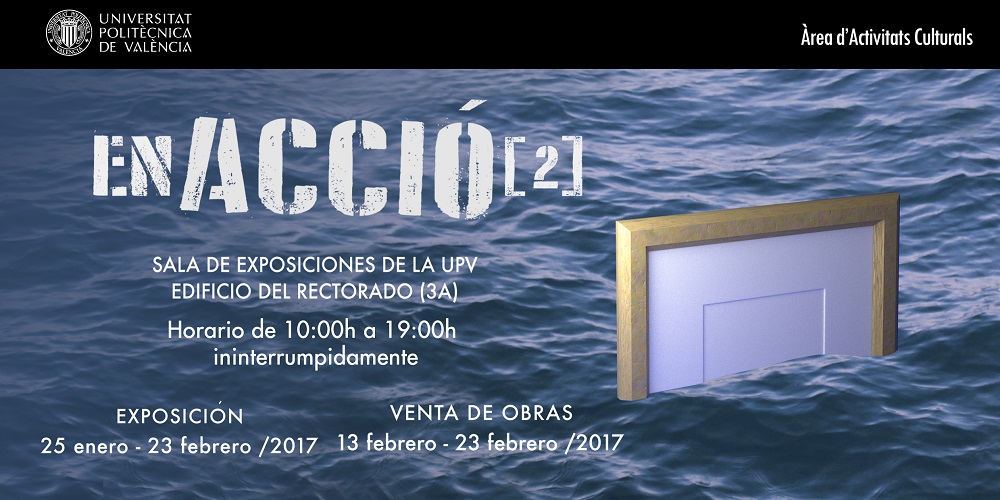 Exhibition in support of Valencia Acoge, with the collaboration of 63 UPV artists and the donation of 153 works on sale from €1. This exhibition will be open to the public from January 25 until February 23. From February 13, the works exhibited will go on sale. The pieces that make up the exhibition include watercolours, oil paintings, sculptures, photographs, prints and artist's books, as well as publications from the Office of Cultural Activities at symbolic prices (books, DVDs and CDs).

Valencia Acoge is an association totally independent of any other association, trade union, party, entity, or administration. After more than ten years of work and many ups and downs, the association has made its own space within the NGO circuit for the defence of the equality and rights of immigrants. Beyond ideologies, the main motivation uniting Valencia Acoge members is the defence of the rights for foreigners in our country. We particularly identify with the provisions of the Universal Declaration of Human Rights, subscribed by Spain. We must demand their enforcement, which should also serve as inspiration for the administration's actions in all areas and as denounce of the hypocrisy of western states when it comes to fulfilling the obligations undertaken on entering into international agreements. 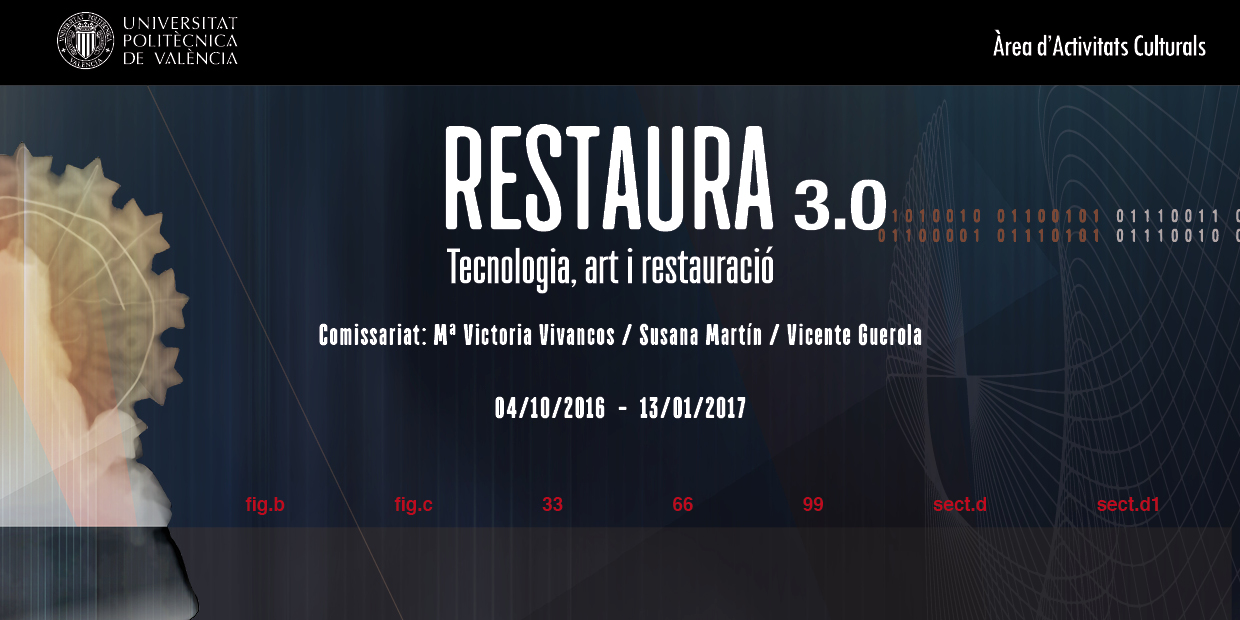 The professional scene for restorers has changed substantially in recent decades. With the implementation of advanced technologies and the specialization of art interventions, it has reached unimaginable levels. These new forms of interdisciplinary collaboration have made it possible to progressively share and integrate the information generated with today's society 3.0.

The training of professionals for heritage conservation is a fundamental pillar of our cultural framework. The Department of Conservation and Restoration of Cultural Heritage of the Universitat Politècnica de València, created 25 years ago, has always pursued the training of qualified and competent specialist staff to whom they have transmitted their concern, curiosity and sensitivity to safeguard our heritage. Likewise, attempts have been made to closely monitor the socio-cultural transformations that have taken place, adapting them to the demands and training needs of each moment.

The exhibition RESTAURA 3.0 (Restore 3.0) is a clear example where a perfect harmony is established between the original work, new materials and new intervention techniques, which share with viewers the solutions adapted as well as intelligible results.