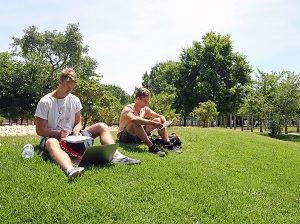 The Shanghai Jiao Tong University (China), responsible for the publication of the most important global ranking of universities in the world - the Academic Ranking of World Universities (ARWU), popularly known as the Shanghai ranking - has once again endorsed the educational level of the Universitat Politècnica de València in its Global Ranking of Academic Subjects (GRAS), which was published a few hours ago including the UPV among the 100 best universities in the world to study three disciplines: Food Science and Technology, Instrumental Science and Technologies, and Agricultural Sciences.

In addition, the 2022 edition of the ranking, made official at 6 am this morning (noon in Beijing), places the institution managed by José E. Capilla on the national podium in up to 7 subjects. Specifically in Food Science and Technology, Biomedical Engineering, Telecommunications Engineering, Civil Engineering, Water Resources, Mechanical Engineering, and Computer Science.

Outstanding in a total of 18 disciplines

It is also top 400 in Chemical Engineering, Energy Science and Engineering, Management, Biotechnology, Computer Science, and Business Administration and Management; and top 500 in Electrical and Electronic Engineering.

GRAS 2022 has analysed more than 5,000 of the world's top universities from 96 countries and contains a total of 54 subject rankings based on objective academic indicators and third-party data to measure the performance of the world's universities on relevant topics, including their research output, research influence, international collaboration, research quality and selected international academic awards based on the Academic Excellence Survey (AES).

Jiao Tong University began publishing its world university rankings by academic subject in 2009 and, in 2017, by introducing an improved methodology, transformed it into the current GRAS. In the end, around 1,800 universities appear in the current ranking edition.

The best technical university in Spain

This new recognition for the UPV is even more relevant if we bear in mind that it is awarded by the most prestigious institution in the world in terms of university certification, the Jiao Tong University, which on 15th August will publish the most renowned ranking in the university world, ARWU, where for 17 years the UPV has been included among the 500 best universities in the world and is now considered as the best technical university in Spain.

Not only the Shanghai ranking, in all its aspects, recognises the UPV's educational level, but it is also supported by prestigious certifiers such as Quacquarelli Symonds (QS), which includes it in the world's top 400 and has named it as the best university in the Valencia Region, and Times Higher Education (THE), which recognises it as one of the 300 universities with the most significant social and economic impact in the world, as well as including it in the global top 100 in educational quality, innovation and infrastructures, and responsible production and consumption.

These data are also especially valued by students when choosing their future. Indeed, this week, the UPV has beaten its historical records for both new students and students who have chosen the UPV as their first choice for their bachelor's degrees.