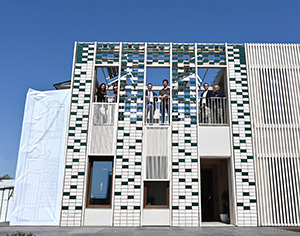 This morning, the Azalea team from the Universitat Politècnica de València (UPV) presented Escalà, an innovative prototype of sustainable and modular housing, specially designed for the neighbourhood of El Cabanyal (Valencia), with which it will participate in the Solar Decathlon Europe 21/22 next June. Azalea UPV is the only Spanish team that has reached the final in this international university competition, promoting research and development of efficient and sustainable housing.

"Escalà is a project designed by and for the residents of El Cabanyal, with new solutions that can serve as an engine of change for other neighbourhoods and cities, always looking for opportunities that look to the future," said Martín Navarro, a member of the Azalea UPV team.

The escalà was the space that was respected between the huts of El Cabanyal in the past for the roof maintenance. A space that Azalea has now reinterpreted, integrating it into its prototype. "It is a space that improves ventilation, lighting, and at the same time, favours the creation of a microclimate in the whole neighbourhood", added Martín Navarro.

An innovative home with a domotic system, water recovery and... even a heating system.

The 71-square-metre home, which uses laminated wood, is divided into two floors; the upper floor is the walkable roof, an open space containing the solar panels and a heat recovery system (called caloret) that reduces energy consumption. To this end, it also has a home automation system that recommends what actions to take to reduce the home's consumption without losing comfort.

In this innovative home, the UPV team incorporates different systems for recovering water resources: the first - SmartWater - makes use of the water that is lost while waiting for the hot water (DHW) to reach the taps; there is another that collects rainwater and a third that filters the water that does not contain organic waste from home, to reuse it for watering the garden.

The courtyard floor, made of the industrial leftovers of traditional ceramic tiles, is capable of draining water - this paving is the result of the Life CerSuds project - is also striking. As insulation, the house incorporates RMT Insulation, a material made from recycled cotton. The interior lining -Honext- controls humidity and helps thermoregulation. And inside, recycled plastics are used in the planters and coat racks and in the urban furniture outside the house.

"We have opted for materials with a long useful life that ensures the possibility of being reused in future projects; 0 km, thus contributing to the reduction of emissions derived from transport; ecological and obtained from recycling processes, free of any compound that is harmful to the environment and human health, and which have a high capacity for recyclability and reuse," said Sofía Iglesias, also a member of the Azalea UPV team.

Symbol of Valencian tradition and a benchmark for innovation in Europe

"These two years of the project have been an incredible learning experience for the whole team. We have researched, designed, and built a proposal that makes the Cabanyal a symbol of Valencian tradition and will be, in Germany, a benchmark of innovation in the whole of Europe. We hope that all the work we have done will inspire and motivate more students to carry out initiatives focused on the planet's future, “ said Marc Escrig, another member of the Azalea team from the Universitat Politècnica de València.

For the Rector José E. Capilla, "the result is outstanding, and I am sure they will obtain good results in the Solar Decathlon Europe contest. I hope they will be the winners, as was the case in the previous edition, in which our students showed a great level. UPV is proud of Azalea".

The Azalea team, part of UPV's Spontaneous Generation programme, is made up of more than 30 students and recent graduates from 16 degree programmes. It was created in 2017 to compete in Solar Decathlon Europe 2019, presented as a project inspired by the Valencian Barraca traditional house. That project won first prize in Architecture, one of the most important categories, second prize in Energy Efficiency and third prize in Engineering and Construction.

This year the competition is being held in Wuppertal, Germany, from 10 to 26 June, and the UPV team, the only Spanish team in the final, is up against 17 competitors. The Escalà house, now located on the Vera campus, will be dismantled in a month and transported in different trailers to the Rhineland.