A new mechanism for the interaction of cells with their environment, which is key for new biomedical applications, described 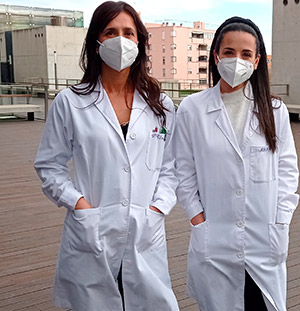 Researchers from the Universitat Politècnica de València (UPV), in collaboration with the CIBER-BBN and the University of Glasgow, have described a new interaction mechanism between cell membrane receptors. In their study, they have discovered that this mechanism can critically affect the adhesion processes of cells to their environment, a finding that may be crucial in the research of applications of regenerative medicine, in therapies that make possible the regeneration of damaged tissues or organs. The work has been published in the Nature group’s Communications Biology journal.

In the laboratories of the Centre for Biomaterials and Tissue Engineering (CBIT) of the UPV, the team of researchers focuses their work on the development of material systems that simulate the extracellular matrix at the molecular level, which could be described as the microenvironment that surrounds cells in a tissue.

“They are normally proteins such as collagen, fibronectin, growth factors, ions, and other molecules that cells have around them and use for the purpose of exchanging information. For example, for stem cell, the cellular environment can determine its fate; what type of cell it must become. Thanks to these materials, it is possible to study and guide cell biology processes in a simplified way, which makes it easier to make new therapeutic targets and advanced therapies for different pathologies”, explains Dr. Patricia Rico, a CIBER-BBN researcher at the UPV’s Centre for Biomaterials and Tissue Engineering.

This researcher adds that the adhesion processes of cells to their environment are key in cell signalling, both in healthy tissues and in diseases of various kinds.

“This finding is very important, since it demonstrates a new function of the boron transporter that is different from that of controlling the homoeostasis of this ion. On the back of this discovery, we are working to identify whether it is possible to develop a new general therapeutic strategy to treat muscular dystrophies based on the extraordinary preclinical results that we have achieved,” explains Patricia Rico.

Duchenne muscular dystrophy (DMD) is a rare inherited disease due to a mutation in a protein called dystrophin that performs the function of anchoring (adhesion) the muscle cells to their environment. It is the most common type of muscular dystrophy in children (with an incidence of 1 in 100,000) and it affects multiple organs, from the skeletal muscles to the heart or the central nervous system. It usually manifests between 2 and 3 years of age, and being a degenerative disease, it drastically reduces these children’s life expectancy.

The researcher's hypothesis is based on the idea that simultaneous stimulation of cell adhesion receptors (integrins) and the boron ion transporter (NaBC1) provide an extra anchor which is also adapted to the diseased cells, which in this way may perhaps restore their deficiencies, common for this type of muscular dystrophies.