A revolution in the field of energy research 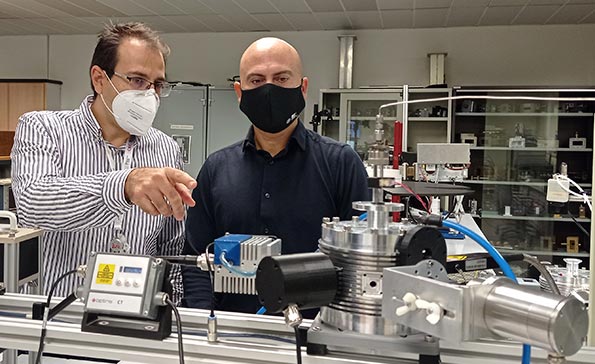 A team of researchers from the Universitat Politècnica de València (UPV) and the Spanish National Research Council (CSIC) has discovered a new method that makes it possible to transform electricity into hydrogen or chemical products by solely using microwaves – without cables and without any type of contact with electrodes. This can represent a disruption in the field of energy research and a key development for the decarbonisation of process industry, as well as for the future of the automotive sector and the chemical industry, among many others. The study has been published in the latest edition of Nature Energy.

The technology developed and patented by the UPV and CSIC is based on the phenomenon of the microwave reduction of solid materials, in this study exemplified by the reduction of Cerium oxide. This method enables to carry out electrochemical processes directly without requiring electrodes, which simplifies and significantly reduce capital costs, as it provides more freedom in the design of the structure of the device and choosing the operation conditions, mainly the electrolysis temperature.

“It is a technology with great practical potential, especially for its use in energy storage and production of synthetic fuels and green chemicals. This aspect has significant importance nowadays, as both transportation and industry are immersed in a transition towards decarbonisation and electrification, meaning they have to meet very challenging targets in 2030 and 2040 in order to decrease the consumption of energy and substances from fossil sources, mainly natural gas and oil,” highlights Prof. José Manuel Serra, researcher from the Chemical Technology Institute (ITQ).

The main use of this “disruptive” technology reported by researchers from the Information Technologies and Communications Institute (ITACA) of the UPV and ITQ, joint centre of the UPV and CSIC, is the production of green hydrogen (produced without emitting greenhouse gases) from water, for industrial and transportation uses.

As noted by the ITQ and ITACA team, it is a technology with great potential for the automotive sector, specifically for cars fuelled by fuel cells and hybrids or large vehicles such as trains or ships. But also for the chemical industry, metallurgy, the ceramic sector or the production of fertilisers, among many other sectors. “This method will make it possible to transform renewable electricity, typically of solar or wind origin, into added value products and green fuels. It has countless uses and we hope that new uses will emerge for energy storage and process industry, by tuning materials composition and operation conditions”, highlights Prof. José Manuel Catalá, researcher at the ITACA institute of the UPV.

In the article published in Nature Energy, the researchers also provide a techno-economic study that reveals that this technology would enable to obtain high energetic efficiency, and that the cost of the facilities (CAPEX) to carry out the hydrogen production process are very competitive compared to conventional technologies for hydrogen production.

The UPV and CSIC team is studying other future uses for this technology, and is currently focusing its efforts on the use for the ultra-fast charging of batteries “Our technology could enable a practically instantaneous reduction (electron injection) of the electrode (metallic anode) that stores energy. In other words, we would go from a (2D) layer-based progressive charging process, which can take hours, to a simultaneous recharging process in the entire (3D) volume of the material storing the energy, which would make it possible to charge a battery in a few seconds,” says Prof. Catalá.

A short history of the discovery

The team of researchers observed that when ionic materials were treated with microwaves, the materials displayed unusual changes in their properties, especially in their electronic conductivity, changes that did not happen upon conventional heating. “We were very intrigued about these sudden changes in their electrical properties and wanted to understand what process was going on. For this reason, we keep on designing new experiments, new microwave reactors and utilizing other analytical techniques,” explains Prof. Catalá.

The team from the ITACA and ITQ institutes verified that microwaves interact with these materials by ‘accelerating’ the electrons and triggering the release of molecules of oxygen from their structure (which is also called reduction). This change became visible to us by sudden alterations to the conductivity at relatively low temperatures (approximately 300ºC). “This non-equilibrium state is maintained while microwaves are applied, but tends to revert back via reoxygenation (reoxidation) when microwaves are switched off. At first sight, we realised the great practical potential of this discovery, especially now that very ambitious goals should be meet in the next two decades to reach an economy with zero net greenhouse gas emissions,” concludes Prof. Serra.