The prototype was presented by Iván Herrero 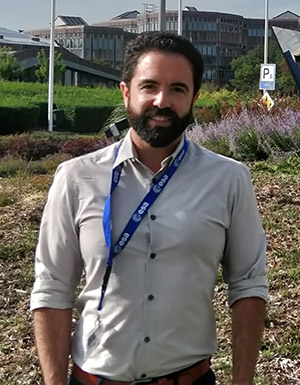 The thesis is focused on the research of methods that reduce the noise level of space rockets during the first phases of launching (engine ignition and takeoff). According to Iván Herrero, at those times, the levels of acoustic pressure experienced by the space vehicles are extremely high and could seriously affect the light structures onboard, such as solar panels and antennas, making it necessary to reduce the noise levels.

“During the launch of space rockets, over 150 dB of sound pressure level are reached at certain frequencies. It is the highest level sound event produced by a human being, only behind some natural events like an earthquake,” explains Iván Herrero.

In addition, the intense sound generated by the primary sources, engine and jet increases due to reflection at the bottom of the rocket launch site, which acts like a mirror from the acoustic point of view, and gives the energy released back to the rocket and the structures onboard, implying economic and safety consequences.

The prototype designed by Iván Herrero, under the supervision of his thesis directors, is based on an array of Helmholtz resonators, which maximizes the sound absorption and diffusion, to mitigate the sound pressure levels generated during these events in the space context.

“The presence of Helmholtz resonators, as well as their specific distribution, produces a reduction of the speed of sound diffusion. This is due to the friction of acoustic waves with the resonator walls, which produces a deceleration. The design of this system was done by optimizing a specific frequency range, which they have been able to reduce by an average of 20 decibels,” explains Iván Herrero.

Despite of the importance of this problem, knowledge about the characteristics of the sources, the behavior of the ground installations regarding the sound diffusion and absorption, and the possible measures to mitigate the impact are still poor. The research work developed at the Gandia campus of UPV and the European Space Agency is in response to this need.

Iván Herrero has developed part of his research work in the technical center of the European Space Agency (ESA) in Holland, thanks to the agreement signed between UPV and ESA within the Networking / Partnering Initiative (NPI) program, in which several universities and research institutes in advanced technologies are participating with potential space applications.

During the thesis work, Iván did two research stays in the European Space Research and Technology Centre (ESTEC) of ESA.