The UPV is the best Spanish university for studying Agriculture and Forestry, and an international benchmark in 14 disciplines 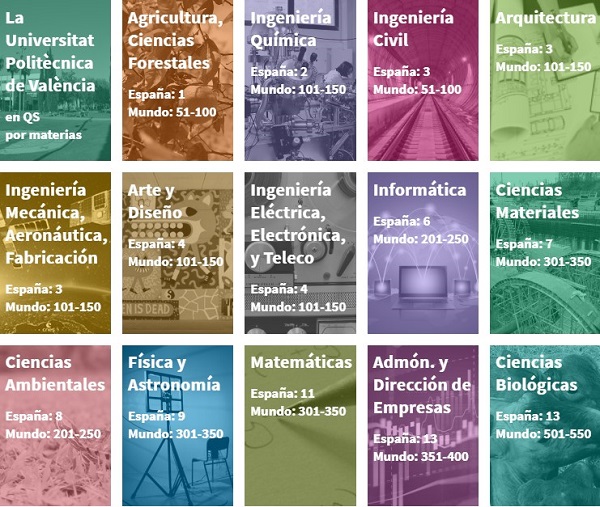 The Universitat Politècnica de València (UPV) is the best Spanish university for studying Agriculture and Forestry: so says the latest edition –published today, Wednesday– of one of the most prestigious indicators in the world, the QS World University Rankings by subjects.

At the international level, the QS ranking also recognises the UPV as one of the 100 best universities in the world in both Agriculture and Forestry, and Civil Engineering.

Additionally, the QS ranking highlights the UPV’s leadership in the field of Computer and Environmental Sciences, in which the UPV ranks among the top 250. In Mathematics, Materials Science and Physics-Astronomy it is placed among the 300 best universities in the world. In Business Administration and Management, it is in the top 400. And in Biological Sciences, among the 550 best.

Therefore, the UPV stands out once again as an international benchmark, being recognised as such in 14 of the 48 disciplines which were analysed in the QS World University Rankings by subject. In its latest edition, 1,369 universities from 83 countries were evaluated.

Spain has room for improvement

On the general situation of Spanish higher education institutions, Ben Sowter, QS research director, points out that this latest edition "shows that the new Minister of Universities, Manuel Castells, will be in charge of a sector which, in spite of the high degree of excellence it already possesses, still has room for improvement. Spain has far fewer degrees in the Top 50 than France and, while Italy has got 8 degrees in the overall top 10, Spain currently has none in that section".

4 indicators and 94,000 responses as a starting point

The ranking, developed by Quacquarelli Symonds, evaluates the work of universities in 48 disciplines, grouped into 5 major areas of knowledge: Arts and Humanities; Engineering and Technology; Life Sciences and Medicine; Natural Sciences; and Social Sciences and Business Management.

In this way, it evaluates the reputation of a university in the global academic community based on 94,000 responses in the QS's Academic Survey, the most extensive research on the subject.

The ranking also allows us to know how employers value the graduates of a particular university –based on the knowledge offered by more than 44,000 human resources managers–, the impact of their research, or the production and impact of each institution’s average faculty member.